The Vogalonga is a rowing event that takes place every year between May and June. All lovers and professionals of rowing from all over the world can participate. There are no winners, those who reach the finish line can say they have made it, regardless of the time taken. The important thing is to know how to row and want to have fun. 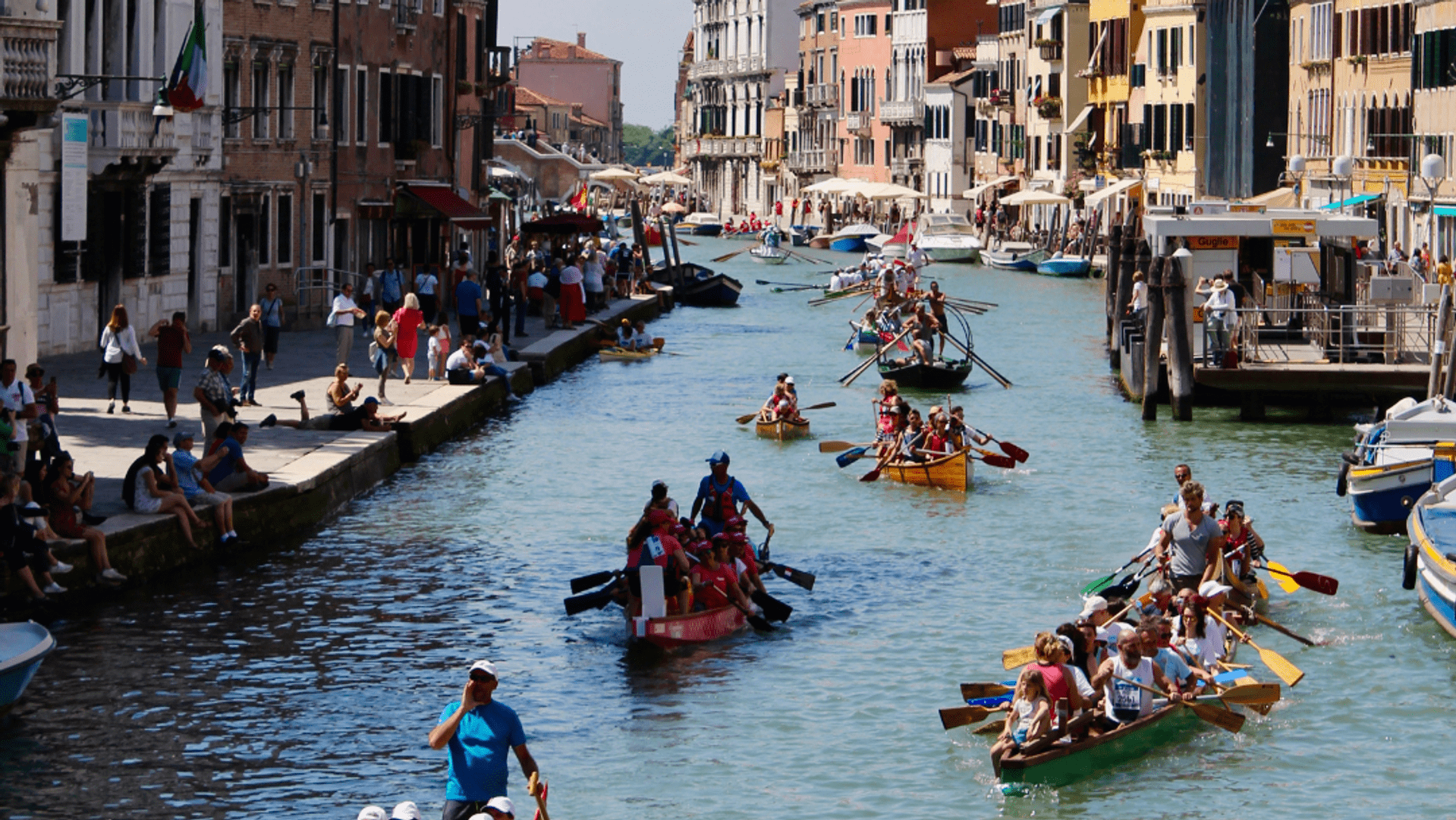 The Vogalonga: A Rowing Race

The Venetian word “vogalonga” means “long row” and refers to a non-competitive race that takes place every year in Venice on the second Sunday after the Feast of the Ascension.

Everybody can take part in this international race, have fun and discover Venice from another perspective.

On this day, thousands of rowing boats like canoes, kayaks, gondolas and dragon boats gather in St. Mark’s basin, ready to start rowing for the safeguard of Venice, while Venetians and tourists await the participants and enjoy the famous spectacle of colors, boats and joy.

Yes, because this initiative was born as a protest against the pollution of the lagoon and the wave movements caused by fast motorboats.

The Story of a Venetian Tradition

Let’s go in order. Rowing was once an essential craft for Venice but after the introduction of motorized means of transport it lost its importance and since the second half of the 19th century it is practiced only by gondoliers and water sport lovers, even until a late age, because it is one of the healthiest sports.

In November 1974, after a rowing regatta, a group of Venetians came up with the idea to reinstate this old Venetian rowing tradition and to start a campaign against motor boats and the pollution of the lagoon which causes damages to the city and its buildings so we can say that this event is a declaration of love for the city.

The first Vogalonga took place on 8th May 1975, on the Day of the Ascension, and was an unexpected success. About 1500 rowers took part in that race and the interest for this race kept growing with the next editions: in 2017 the number of rowers was of 7640 people and the 45th edition of 2019 even set a record of 8350 participants from all over the world!

The rowers can decide whether they want to use the Venetian rowing technique (“voga alla veneta”), which means standing and facing forward, or the British rowing technique sitting with the back to the bow.

The Voga alla veneta is a special rowing technique that developed in Venice and allows a single rower to move a boat with one or two oars by standing on the stern. This position allows to scrutinize the bottom of the canals and avoid running aground.

Another distinctive feature of this technique is the presence of a special oarlock called “forcola” that helps the rower to move the oar quickly. This element can be also seen on gondolas, as gondoliers use this kind of technique to maneuver their boat.

Today Venetian rowing is considered a new sporting specialty that can be learnt in many rowing clubs not only in Venice or on the Venetian mainland but also abroad.

The race begins at 9 am in St. Mark’s basin after a canon shot. Motorboats are not allowed during the regatta so even water buses and water taxes are suspended along the entire route of the Vogalonga which runs for about 30 km to the North lagoon.

After having reached the Island of Sant’Elena, the participants sail past the other islands: Vignole, Sant’Erasmo, San Francesco del Deserto, Burano, Murano (famous for glass factories), Madonna del Monte and San Giacomo in Paludo and head back to Venice. Once reached the city, they sail along the Cannaregio Canal in the Cannaregio district and along the Grand Canal to Punta della Dogana in front of St. Mark’s Square, where the route ends.

The quickest participants reach the final line in a couple of hours, the others need more time but since there are no winners, time is not important. All participants receive a medal in recognition for having participated in this initiative.

Everybody can take part in the regatta with their own boat or they can even hire a boat. The rowers must be able to row and be in a good physical condition because this is a very demanding water sport. It is also necessary to take into account the currents and the wind which sometimes push in the opposite direction. However, this is a fun adventure and it gives you the chance to discover the beauty of the lagoon from another perspective.

If you do not want to row or you cannot do it, you can always enjoy the show from St. Mark’s Square, the Rialto Bridge or the Fondamenta Cannaregio in the district of Cannaregio. On this day the city is usually very crowded because people from all over the world come to enjoy the festive atmosphere of the race which is, after all, act of love for the city.

A Glance at the Vogalonga

Registrations: it is possible to participate to the race by registering here: http://www.vogalonga.com/en/registration/

Spectators: A reservation is not required. It is possible to see the regatta from the canal banks, the Rialto Bridge, the Accademia Bridge, St. Mark’s Square or the islands Murano and Burano.